What is Feline Heartworm?

Heartworm is a disease in which parasitic worms of the species Dirofilaria immitis infest the heart and associated blood vessels. Dogs and wild canines are the normal host for this parasite, but cats can also be carriers.

The disease is transmitted by mosquitoes, so even cats which have no contact with other pets can be at risk. Heartworm has even been found in cats considered to be "indoors-only" cats. It takes only one infected mosquito to bite a cat and transmit the disease .

Heartworm disease has been found in dogs native to every state in the US. The parasite is most common within 150 miles of the Atlantic and Gulf coasts, and along the Mississippi River and its major tributaries. Humidity and temperature greater than 57 degrees Fahrenheit are vital elements for the transmission of the disease. The summer months are the major transmission period, although in some of the more southern states the disease can be transmitted year-round. In any given area, the cat infection rate will only be five to 15 per cent of that of dogs.

As cats are not the heartworms' natural host, the disease differs from that in dogs. This makes the signs more difficult to detect, with the symptoms more unpredictable and potentially more dangerous than in dogs.

In a dog, the adult worms normally live in the heart and associated blood vessels. However in a cat the worms are found not only in the heart but in other so-called 'aberrant sites', such as body cavities, arteries, or the brain or the spinal cord. This makes heartworm symptoms more variable in cats, with many felines displaying no signs at all and dying very suddenly, occurring in up to 23 per cent of feline heartworm cases.

Cats also tend to have a stronger immune reaction to the parasites, and are more successful in fighting off the immature stages of heartworm infection than dogs. This means they generally have a smaller number of worms than a dog. However, as they also have smaller bodies than dogs, even a small number of worms in the heart or blood vessels of a cat can cause severe problems. 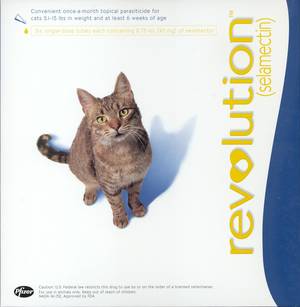 The worms can cause a small blood clot to form, which can travel to the lungs or other vital organs and effectively block any blood from reaching that area. These blockages may cause sudden death. In cases where the clot lodges in the lungs, severe respiratory difficulties may develop.

The small number of worms infesting a cat makes it more likely that there will be no mixed-sex pairs capable of mating and producing young. The young worms are called microfilaria and are released into the bloodstream.

These offspring are not a problem in themselves as they are tiny and do not interfere with blood flow. However they are a means of detecting the presence of infection, and will show up in a blood sample examined under a microscope.

Additionly, even where there is a male and female which mate, the feline's strong immune reaction often kills off all of the baby worms, preventing their detection in a blood sample. Statistically, only about 20 per cent of cats will have a detectable level of microfilaria, so such tests are very unreliable for diagnosing heartworm infection.

Other blood tests used for heartworm detection rely on finding antigens (special proteins) from the surface of the adult female worms. Again this can be difficult in cats, as they may have an all-male infection, the worms may be in an aberrant site, or there may be so few female worms that the number of antigens is too low to be detected.

All of the tests available for heartworm disease diagnosis require the presence of adult worms, either to mate and produce offspring, or to produce detectable antigens. From the moment a mosquito infects a cat, it takes approximately seven to eight months for the worms to mature to adulthood, so it is not possible to detect infection prior to this time.

In the case of heartworm disease, prevention is much better than cure. The treatment for adult heartworm infection is only registered for use in dogs. Veterinarians can use this treatment "off-label" in cats under their right to prescribe, as it is unpleasant (an injection deep into muscles) and hazardous. The dying worms can be dislodged from the heart and potentially cause a blockage, halting any further blood flow to that area.

Your veterinarian can advise you which of these options is best for your cat and when the recommended prevention season occurs in your area.