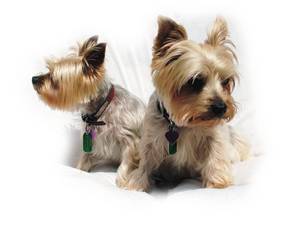 Heartworm is a serious and potentially fatal disease in dogs caused by parasitic worms blocking the heart and associated blood vessels. It is easily preventable by administering one of a number of medications.

If your dog has a history of missing heartworm preventative medication, has never been on medication, or has any clinical signs suggesting the disease, your veterinarian will want to test for the presence of heartworm.

There are two main types of tests which look for evidence of the worms in blood, with both relying on having adult worms in the heart. It takes about six months from the time a mosquito infects a dog with heartworm until the parasites reach the heart and mature into adults, and these tests cannot diagnose an infection until this point. There are no diagnostic tests available to detect a heartworm infection before the adult stage. Therefore, if you miss a month or two of preventative medication, just remember that it will be necessary to wait for a few months to know if your dog has contracted heartworm.

The test used is an "antigen" test. It only requires a small amount of blood to be collected from your dog. This test detects antigens (substances on the worm which provoke an immune response from the dog) from adult female heartworms. It can show a positive result from about five months after infection, if the worms mature quickly.

There are simple test kits available which enable vets to perform these tests in the clinic fairly quickly, and they will give either a positive or negative result. These are fairly reliable tests but if there are no female worms present or the test is performed too early (before the worms are mature) it will yield a false negative result. This is the most common test performed in a clinic to diagnose heartworm disease.

The other common heartworm tests performed in clinics are those which look for baby worms, called microfilariae, in the blood. When present, these can be seen wriggling between blood cells in specially-prepared blood smears examined under a microscope. These tests are less reliable than the antigen tests and are more difficult to perform, so are used less frequently. Microfilariae are not usually produced until approximately six and a half months after infection, so if the test is performed too soon, there will be a false negative result.

Infections in which the worms are all one sex and so cannot reproduce will also produce a false negative. Both the dog's immune system and heartworm preventative medication can clear all the microfilaria from the bloodstream. An infection of heartworm where adults are found in the heart ,but no microfilariae are found in the blood, is called an occult infection. There are also other types of larvae from harmless parasites which may be seen in the blood and confused with heartworm microfilariae. Iit takes close examination to differentiate them.

In addition to these tests, your veterinarian may wish to perform further tests which indicate the severity of the disease. These may include: