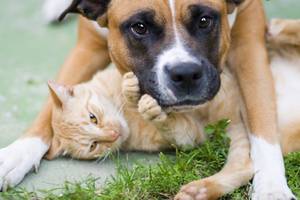 Heartworm is a parasitic disease spread by mosquitoes. It involves worms living in the blood vessels around the heart and can be potentially fatal in affected animals.

Heartworm (Dirofilaria immitis) is a parasitic worm. Adult worms normally live in the heart and surrounding blood vessels of canines. Heartworm is found in many parts of the world, including the US, Canada, South America, Europe, coastal areas of Africa, Asia and Australia. In the US, heartworm has been found in dogs in all 50 states.

Heartworm is spread by mosquitoes, not contact with other animals, so even dogs which do not come into contact with any other pets are susceptible to the disease. Many species of mosquito are capable of transmitting the disease in the US. While dogs are the normal (or definitive) host for adults, other pets such as cats and ferrets can also be infected. They are "abnormal hosts". Wild canines, such as wolves and foxes, can also be infected.

It is very rare for a human to develop heartworm disease; humans cannot contract it from an infected pet - only by being bitten by an infected mosquito. Even when this happens, the larvae have a low chance of survival and development as they are not adapted to living in a human being.

In dogs, adult heartworms inhabiting the heart and surrounding blood vessels mate and produce young. These baby worms (first-stage larvae, or L1) are known as "microfilariae". The microfilariae are released into the dog's blood stream. When a dog is bitten by a mosquito, the mosquito sucks up the microfilariae while feeding. The mosquito is known as an "intermediate host" for the heartworm - it must transfer to a mosquito so as to develop through further larval stages to become a mature adult. Without a mosquito, the microfilaria do not develop further. However some can remain alive in the dog's circulation for more than a year.

It takes approximately two to three weeks for larvae to develop in a mosquito's body to a point where they can reinfect dogs (the third larval stage, or L3). The temperature must stay above 57?F (14?C) for the larvae to develop. In some parts of the country (particularly the north) the winter is too cold for any development or transmission of heartworm to occur, so the dog danger period is only in summer.

In other parts of the country (particularly the southern states) it is warm enough year-round, so pets are always at risk. Warm summers will accelerate larvae development. Once the larvae are ready for transmission, they move into the mosquito's mouthparts, so that the next time it feeds on a dog the mosquito saliva will transfer the infective larvae into the bite wound.

The larvae then move through the tissues of the dog (under skin, in muscles and fat), evolving through two further stages before becoming immature adult worms. The immature worms generally arrive in the heart and surrounding vessels approximately four months after infection, becoming mature adults around two months later. Adult heartworms can live for up to seven years in dogs!

Once in the heart vessels, the worms interfere with blood flow and cause the organ to fail.

Prevention of heartworm is much better than cure - ensure you treat your pet with an effective preventative throughout the entire mosquito season. Consult your veterinarian for when this occurs in your area - it varies from state to state.