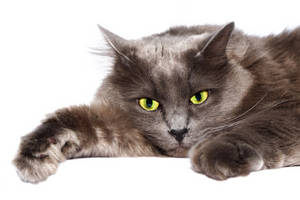 When a new cat is introduced into a home with an existing cat, "slowly, slowly" is the best way to introduce the two. This may take several weeks.

Getting a new playmate for your cat can be a wonderful experience. Or a complete nightmare.

Many cats really like being the only cats and having the home to themselves, so the introduction of a new cat sends them into orbit. This often results in behavioral problems like fighting, urine spraying and defecating in all the wrong places by the new cat or the existing cat, or both.

Introducing your new pet slowly and carefully is an important part of easing the transition of the existing cat into a multi-cat household.

The worst thing you can do is to simply release the new cat into the house with the existing cat. Remember that the territory has belonged to one cat and, much like small children, cats do not like to share! Territorial aggression is a common result when a new cat is introduced to an existing cat's household.

When you bring the new cat indoors, leave it in the crate and place it somewhere quite high so the existing cat can see the new pet but not have access to it. This also allows the new cat to have a look at its surroundings. Leave the cat in this place for some time, then slowly move the cage down towards the floor, stopping at varyious heights along the way. This will take several hours.

Eventually, the cat will be in a cage on the floor of the home,on the same level as the existing cat. Allow the cats to see and smell each other through the cage but do not allow them to fight. If there are any signs of aggression, move the cats apart.

After this initial meeting, it is probably a good idea to keep the cats in separate rooms for a few days or weeks. Ensure there is always a litter tray and water available in the room with the cats. Move the new cat from room to room to allow it to investigate its new home.

Allow the cats to be together only when being supervised and give both cats attention and treats when they are together, to teach them that being together is a good thing! For a time during the settling in period, you may need to keep one of the cats in a crate (alternating them each day). Reward them for friendly behavior, but do not punish them for aggression, just separate them.

The use of pheromones may assist in calming the cats in the introductory period. Feliway mimics the calming feline facial pheromones and is available as either a furniture and room spray or as a diffuser, which is plugged into an electricity outlet and releases the pheromone for up to four weeks. If the problem is more severe, one or both cats may need anti-anxiety medication, which will require a visit to the veterinarian as this is are only available with a prescription.

Many cats can integrate into the same home and become great friends. Younger cats and those of opposite sexes tend to be more likely to get along with one another. Unfortunately, some cats simply will not get along and it may be better for both of them to re-home one of your pets somewhere where it can be the only cat.