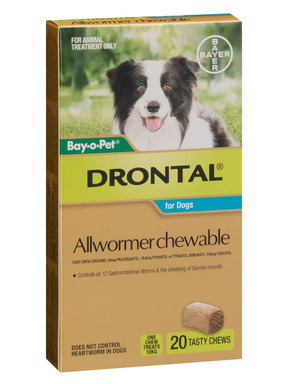 GENERIC NOW AVAILABLE
SELECT THE GENERIC OPTION TO SAVE $$$

Buy the generic and save even more!
Did you know that we also sell a generic of Drontal? The generic contains exactly the same active ingredients as Drontal for a fraction of the price. 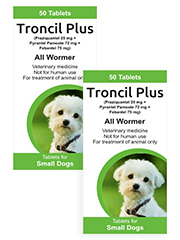 What are the active ingredients in Drontal Allwormer for Dogs?

How Drontal Allwormer for Dogs works

Drontal starts working as soon as it is ingested. Worms, if present, may or may not appear in the droppings for up to 48 hours after treatment.

How can you properly administer Drontal Allwormer for Dogs?

Drontal is administered orally. The frequency of administration is dependent on the age of the puppy and what other parasite prevention products the puppy or dog is receiving. This is due to the fact that many products may already control several of the gastrointestinal worms that dogs can be affected by.

As a general rule puppies should be wormed at 2, 4, 8, and 12 weeks of age and then every month until they are 6 months of age. After this they are wormed every 3 months or as advised by a veterinarian. In areas where hydatid tapeworm is a problem dogs should be wormed every 6 weeks. Local veterinary advice should be sought on this matter. For the treatment of Giardia sp. Drontal needs to be given for 3 consecutive days and repeated as per veterinary advice.

Is Drontal Allwormer safe for all dogs?

Drontal is safe to use in all dogs including old dogs, young pups, working dogs, and greyhounds as well as pregnant and lactating bitches. Drontal should be given to bitches prior to mating, to pregnant bitches sometime in the last 10 days before whelping and again 2 and 4 weeks after whelping.

Wormer chews that my dogs love. I'm giving it 5 stars because it's perf!

My dog suffered from worms. I bought Drontal from Pet shed and gave it to my dog as soon as I received it. The result is amazing. Worms are gone and my dog is back to being energetic.

No worries from worms with Drontal. Easy to chew and the dogs won't spit it.

Love it! This is exactly what I used to buy from the vet. It prevents my dog from having intestinal worms and lets him play outdoors without worrying,

Give them drontal and be confident that they will always stay worm free no matter how many worms are there hiding in the leaves this fall. 100% protection.

I bought the 2 pack to try it on my dog and I totally love it. My dog was dewormed and I can see those nasty worms from his poop. Fun thing is he loves to chew this wormer.

My lab retriever loves this one!! It looks exactly like the one we buy from the vet but definitely cheaper price for this one!

Great wormers to use. Easy to feed on my dogs

This is perf!! My dogs are worm free ever since I tried this one.

I used to buy drontal from the vet but I got tired from their expensive prices. I'm so happy I found Pet Shed and I now order drontal for my dogs here. Thank you!