What Is Sarcoptic Mange? 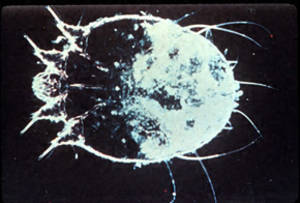 Sarcoptic mange is the most common type of mange in dogs. It is a skin disease caused by host-specific strains of the burrowing mite Sarcoptes scabei. The strain that affects dogs is Sarcoptes scabiei var. canis.

The canine version can transfer to humans as a result of prolonged, frequent or close contact with an affected dog. Mild to intense skin itching, mainly on the arms, is the hallmark of infection in people. The infection is self-limiting, lasting only a few days.

Transmission between dogs is also mainly by direct contact, with pregnant female mites being the main sources of transmission. In contrast to humans, the disease is highly contagious among dogs.

Adult Sarcoptes mites are 0.2mm to 0.4mm long, round to oval in shape and white in color. The two front pairs of legs extend out beyond the edge of the body , while the hind legs are small and rudimentary. Males feature hind legs adorned with suckers, while females, have hind legs with long bristles.

Adult Sarcoptes mites mate in burrows in the host's skin, then lay eggs four to five days later in the burrows. These eggs hatch into six-legged larvae which migrate to the skin surface. The larvae feed on skin debris on the host before molting into several nymph stages and a final adult stage. Nymphs appear as smaller versions of adults, while larvae are similar but have one less pair of legs.

Development to the adult stage takes 17 days on average. The life cycle can be completed in as little as 10 days under ideal conditions but normally takes around three weeks. Adult female mites normally live for about one to two months, laying up to three eggs a day for two to three weeks before dying. Male mites die shortly after mating.

Signs and symptoms of sarcoptic mange

The symptoms of canine sarcoptic mange are related to the mite's burrowing into the skin, which causes damage and irritation, as well as allergies to the mite and its saliva. The predominant sign is incessant itching. This can affect dogs of any age and, if untreated, the disease can persist for weeks or even years.

Female Sarcoptes mites burrow into the outer layers of the skin. Initially, they prefer sparsely-haired areas of the body, so the disease usually begins on the elbows, the tips of the ears, the chest and abdomen, in the armpits and groin, around the eyes and on the hind legs.

Without treatment, sarcoptic mange spreads over the body and may become a severe generalized skin problem. The mites cause an intense itching, with the resultant scratching and rubbing leading to inflamed skin, nodules and pimples.

The skin becomes dry and scaly, then sores and scabs develop, often followed by a bacterial infection. If untreated, the infection spreads, with the skin becoming thickened and wrinkled and possibly featuring extensive hair loss. In rare cases, dogs display itching without obvious skin inflammation and crusting.