How to Stop Your Dog Itching 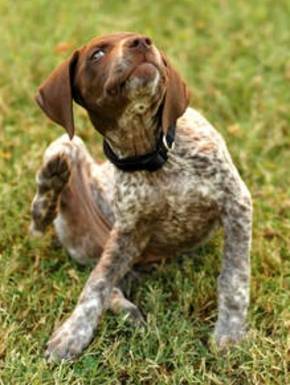 Itchy dogs are all too common. Itching can be an indication of many different skin diseases so, without a good examination, it can be very difficult to pinpoint exactly what is wrong.

Some diseases are more common than others, however, so some can be ruled out easily without resorting to invasive diagnostic testing.

While scratching is an obvious sign the dog is itchy, the pet may also be constantly licking, particularly its paws, biting or chewing, rubbing its body along the ground, or shaking its head if it has itchy ears.

Itching is often associated with inflamed skin, and you may also see other signs such as reddened skin, hair loss, pimples, and weeping or flaking skin. Some dogs also have a terrible smell.

Occassionally, itching is associated with more sinister causes such as hormonal imbalances, behavioral disorders or tumors, so if you are concerned, it is always advisable to contact your veterinarian to get to the bottom of the problem.

There is a concept known as the 'itch threshold', referring to a certain level of itchiness which must be reached before a dog starts to scratch. Normally, itching is a result of a combination of factors, so if some of these factors can be removed, the itch level may fall below the itch threshold and the dog may stop scratching without all of the factors contributing to the itchiness having to be resolved. So, for example, treating for fleas in a dog with an underlying food allergy may be sufficient to stop the clinical signs of itching, even though the dog still has the food allergy.

The distribution of any lesions on the animal's body may provide a clue to the cause. For example, FAD is often seen in a Christmas tree pattern over the dog's rump, while atopy often manifests itself as itchy ears and paws. Contact allergies more often occur on the feet or underbelly, which are more likely to come in contact with an allergen.

The timing of the onset of disease can also provide clues,. Many allergies are seasonal and associated with certain pollens, so they are seen during spring and summer when grasses are going to seed and flowers are blooming.