What Are Canine Whipworms? 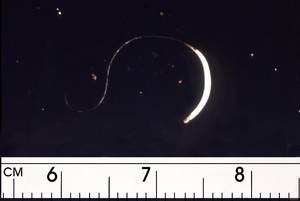 Whipworms are parasites which live in a dog's large intestine. They can cause diarrhea, weight loss and anemia.

The whipworm gets its name from the adult's characteristic whip-like shape, with the front end narrower than the back end.

Unlike many other internal parasites, whipworms, which belong to a large group of parasites called Trichuris, display a relatively high degree of host specificity, with canine whipworms (Trichuris vulpis) very rarely occurring in other species, so it is not a risk to human health. Cats are not affected by whipworms, either.

The canine whipworm lives in the large intestine of dogs, causing severe irritation to the linings of those organs. Adult worms are three inches or less in length with males significantly smaller than the egg-bearing females. Adult whipworms embed their thin head end deeply into the intestinal lining and feed on tissue secretions, not blood. However, they are greedy and wasteful feeders and there is often a leakage of blood as a result of their feeding and burrowing activities.

Infection of a dog occurs only when it accidentally ingests whipworm eggs containing infective larvae or juvenile worms. The eggs are thick walled and very resistant to drying and heat, so they can remain viable in the environment for years, even through the heat of summer. 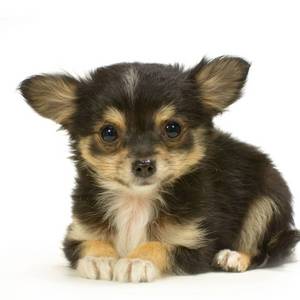 When swallowed, the eggs hatch in the small intestine and the larvae migrate into the gut wall for two to 10 days. They then migrate back into the gut and pass down with the passage of food into the large intestine and mature into adult worms.

It takes at least 10 weeks from the time of infection until there will be any worm eggs, a length of time known as the pre-patent period of whipworm. Due to this long pre-patent period, whipworm infection is often not recognized in young pups, so treatments for pups are not directed against whipworms, only roundworms and hookworms.

The life span of the canine whipworm ranges from three to 18 months. Because whipworms live for an extended period of time, an untreated dog can be constantly re-infected by new eggs in feces. A fertile female worm can lay about 2000 eggs a day, although the shedding of eggs is not consistent on a day to day basis.

Veterinarians will attempt to diagnose the disease by looking for worm eggs in stool samples. It is not uncommon to find no eggs in the feces, despite a dog being infected with whipworm. For this reason, many veterinarians will simply worm the dog with a product effective against whipworm if they suspect this may be a problem.

Compared to many other parasites, whipworms cause less harm to their hosts. Adult worms burrowing into the large intestinal wall cause inflammation and bleeding from the gut. Occasionally, heavy infestations occur and affected dogs may show signs of recurrent bouts of abdominal pain and diarrhea with stools that have blood or mucus on them. Young dogs, or dogs with chronic infection, can suffer weight loss, dehydration and anemia due to the blood loss.

Treating whipworm infection can be a difficult task since re-infection from contaminated environments is such a problem. Eggs, because of their thick shell, are very resistant. They can remain in the environment for up to five years and are resistant to most cleaning methods and to freezing, but they can be dried out with strong drying agents such as agricultural lime. However, it is extremely difficult to eliminate eggs in soil, so the preferred alternative is to replace the contaminated soil with new soil, gravel and pavement.

There are several ingredients on the market which are effective in killing whipworms such as febantel-pyrantel combination, milbemycin oxime and others. Dogs should be treated for whipworm at least every three months throughout life. Many wormers will also treat other kinds of worms. Your veterinarian can advise you on the most appropriate product for your pet.