What Are Canine Roundworms?

Roundworms are parasites which live in the gut of dogs and cats and can cause illness. They can cause diarrhea, a scruffy coat, pot-bellied appearance, a cough or block the intestines. There are three roundworm species affecting dogs and cats, Toxocara canis, Toxocara cati and Toxascaris leonina.

T. canis is the most important type for dogs, and it can be fatal to puppies. T.cati occurs mainly in cats and is very rare in dogs. T. leonina occurs in both pets but is much less dangerous. The larvae of these worms may also cause disease in humans, particularly T. canis.

Adult roundworms, which look like short, fat strands of spaghetti, reside in the small intestine and can grow to about six inches long. They feed on bodily tissues and fluids, not blood.

The worms have interesting life cycles. Adults mate in the pet's small intestine, then the female lays eggs which are passed out of the body with the pet's feces. The eggs can remain infectious in the environment for years, as their thick shell makes them relatively resistant to drying out and much harder to kill.

Within the egg, the baby worm or larva develops to such a stage that it is ready to infect a new host. This takes two to four weeks. At this point, the larvae hopes to be ingested by a passing dog or cat so it can continue its life cycle.

What happens when a roundworm is ingested depends on the age of the carrier. In puppies and kittens up to three months old, the worm migrates through the body to the liver, then the lungs,where it is coughed up and often swallowed again, so it can make its way back to the gut. This isn't always successful and some owners notice their pet coughing up worms. Once the worm is back in the gut, the life cycle continues. 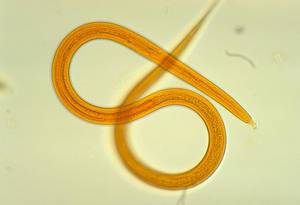 The bodies of older animals, with more-developed immune systems, react by trying to contain the parasites, which are normally walled off by the gut to prevent them migrating any further. They often become trapped in the wall of the intestines or in the abdominal wall. However, this does not kill the worms, and they can remain alive in this encysted state for a year or more.

In adult female dogs which become pregnant, roundworm larvae that have been dormant are reactivated, probably by hormonal activity. Once again the roundworms migrate through the body,
but in this case, they take a few different routes:

Puppies appear to be the most common victims of roundworm infection. It has been estimated that over 95 per cent of new puppies are infected with roundworm! They are also a problem in kittens, which commonly acquire infection through their mothers' milk. Roundworms may also infect humans.

In more severe cases, roundworms can cause pneumonia, as they migrate through the lungs and can cause coughing, breathing difficulties, a nasal discharge and weakness or even lead to collapse. In the very worst cases, the largest worms can completely block the gut. This can be very painful and can potentially cause death in affected animals.

The popularity of dogs and cats has been highlighted as the major risk factor for human infection. If accidentally ingested, the immature worms can migrate to human organs such as the liver, lungs or eyes. The human body, as with adult dogs and cats, tries to wall them off to prevent them moving further. The immune reaction can cause a large lump in the body, occasionally confused with cancer. In humans the disease is known as visceral larva migrans, or, if in the eye, ocular larva migrans. Children are at a higher risk of infection due to play habits such as eating dirt, their attraction to pets and their dislike of hand washing.

There are several ingredients on the market which are effective in killing roundworms, such as pyrantel, milbemycin and levamisole. Many of these will also treat other kinds of worms. Your veterinarian can advise you on the most appropriate choice for your pet.

Current intestinal worm treatment recommendations for puppies state that they should be treated at two, four, six, eight, ten, and 12 weeks of age, then monthly until they are three months old, then at least every three months from then on. Pregnant bitches should be treated from at least day 42 of pregnancy and fortnightly while the pups are suckling.