What Is Notodric Mange (Feline Scabies)? 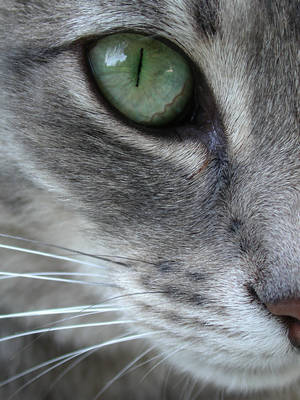 Notoedric mange is a skin disease caused by a burrowing mite and is the feline version of scabies. The mite, Notoedres cati, occurs worldwide and is endemic in some parts of the US, particularly along the Gulf Coast.

It is a rare to infrequent disease which occurs in localized pockets, however the mite can affect all cats regardless of age, sex or breed. In humans, transient infections with signs characteristic of mange, such as itching, a rash with small nodules or pimples in the skin can occur occasionally, but the disease is self-limiting.

Adult mites are up to 0.4mm long, round to oval in shape and white in color. The two front pairs of legs extend out beyond the edge of the body but the hind legs are small and rudimentary. In males, the hind legs boast suckers, while in females they feature long bristles.

Adult male and female mites mate then lay eggs a few days later in burrows in the skin of the host. These eggs hatch into six-legged larvae. The larvae feed on the skin debris of the host, then molt into several nymph stage, then a final adult stage. Nymphs appear as smaller versions of adults, while larvae are similar but have one less pair of legs.

The life cycle can be completed in as little as ten days under ideal conditions, but normally takes around three weeks. Adult mites, which are found in groups or nests under the skin, normally live for about a month. The nymphs and larvae are more mobile and move about the surface of the skin. These are the stages which normally transmit the highly-contagious disease to uninfected animals. The mites can only live for a few days off a host

The most commonly used tests to diagnose feline scabies are skin scrapings, which aim to scrape out a few mites from their burrows in the skin. These can then be identified under a microscope. The hair is usually clipped from the site which is going to be scraped, then a scalpel blade doused with mineral oil is scraped across the skin. The skin and debris collected on the scalpel blade are then wiped onto a slide and examined under a microscope by the veterinarian. However sometimes the mites can be very difficult to find.

No products are specifically registered for the treatment of Notoedres, but selamectin, lime-sulfur dips, pyrethrin shampoos and ivermectin are reported to be effective. Feline scabies is highly contagious for cats, so it is important to isolate infected pets and treat any in-contact animals, even if they are not scratching!