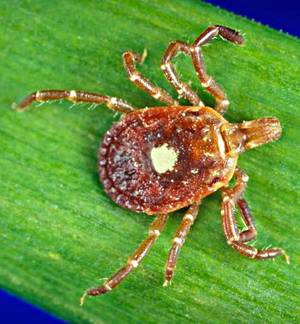 The Lone Star Tick (Amblyomma americanum) was once considered primarily a Southern pest, but its geographic range is increasing across the southern, Midwestern and eastern states. Populations are now common from central Texas northwards to Iowa, then across to the Atlantic coast.

Male ticks have pale decorations on their outer shell, or scutum, while females have a distinctive silver-colored spot or star, which gives the tick its name.

The Lone Star Tick is found in woodland areas, scrub, young forests, grassy meadows and marginal vegetation along rivers and streams. Its distribution is closely linked to the habitat of its preferred reproductive host, the white-tailed deer (Odocoileus virginianus), but it can have a wide range of hosts. It is a three-host tick, meaning it infests and feeds upon three different hosts throughout its life.

The parasite starts life as an egg which hatches to produce a six-legged larvae. This feeds and molts to an eight-legged nymph which then feeds and molts to an eight-legged adult. Like many other species of ticks, the larval and nymph stages prefer smaller mammals and birds, but can also infest dogs or cats. While the preferred host of the adult stage is the white-tailed deer, adults, like larvae and nymphs, can also be found on cats, dogs, cattle, horses, humans, raccoons and sheep. In many locations, larger animals tend to be more heavily infested than smaller animals.

These parasites do not commence significant activity until ambient temperatures are greater than 50oF. Low humidity and high daytime temperatures restrict their occurrence and activity.

Newly-hatched larvae feed for about a week on a host. After they have filled up on blood (called engorgement), the larvae drop from the host into vegetation and molt one to four weeks later. Larvae may survive for up to nine months without a blood meal.

Larvae appear in late July and feeding activity continues through to late September, with numbers peaking in early August. Larvae can congregate in large numbers, up to a thousand or more, on a single plant leaf. These larvae emerge from an egg mass from a single female tick which successfully fed and mated with a male tick earlier that same spring.

Newly-hatched nymphs then engorge for another week, detach from the host and rest for two to five weeks before molting to become adults. Nymphs may survive for up to 15 months without a blood meal. They tend to be seen from May through to early August,with peak numbers in May or June. Lone Star Tick nymphs can move very quickly and may cover a person's legs or arms in less than five minutes, a characteristic which aids in identifying this species.

Adults may survive without a blood meal for up to 14 months, by hibernating. However, they do not produce young until they have fed. The Lone Star Tick may display two different types of host-seeking behavior; both questing, which means passively waiting for a host to pass by; and hunting, or actively chasing down a host.

Adult numbers start to increase in late February through to the end of June, peaking in May. Once they locate a suitable host, they feed and mate and then detach from the host. The females rest for one to two weeks before beginning to lay eggs. Each female produces up to 8300 eggs, depositing them mainly under leaf and soil litter from middle to late spring. Incubation of the eggs may take one to four months, depending on the ambient temperature. 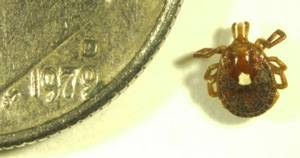 Like other three-host ticks in temperate climates, the life cycle often takes two years to complete, while in warmer coastal climates in can be completed within a single year.

Several diseases are transmitted to both pets and humans by the Lone Star Tick, including Ehrlichiosis to humans (Ehrlichia chaffensis) and to dogs (Ehrlichia ewingii). It can also transmit Tularemia or Hunter's Disease (Francella tularensis) which has symptoms such as abdominal pain, fever, loss of appetite, vomiting and diarrhea or even skin or eye ulceration.

Southern Tick-associated Rash Illness (Borrelia lonestari), which is similar to Lyme disease, is transmitted by this parasite, as well as possibly Lyme disease (Borrelia burgdorferi) itself. Both diseases have similar symptoms of fever, lameness, lethargy and loss of appetite. The Lone Star Tick may also transmit Rocky Mountain Spotted Fever (Rickettsia rickettsii) to dogs and humans. Symptoms include fever, lethargy, vomiting and loss of appetite. It is also suspected in the transmission of tick paralysis in dogs and Q fever (Coxiella burnetti) in humans.

The use of tick prevention products such as Frontline, collars or dips containing amitraz or permethrin-based products is recommended throughout the tick season in conjunction with daily inspections. Your veterinarian can recommend an appropriate product for your dog.

If a tick is found, it should be removed immediately. Do not touch the tick with your fingers and ensure it is pulled out gently backwards, grasping the tick as close as possible to the mouth parts to avoid leaving the head embedded in the pet's skin. You may wish to keep the tick in a sealed jar to assist the veterinarian's diagnosis in the event your pet develops signs of tick-associated disease. If you do suspect a tick-related disease, take your pet to your veterinarian as soon as possible. The sooner treatment is started, the better the prognosis will be.

Frontline? is a registered trademark of Merial