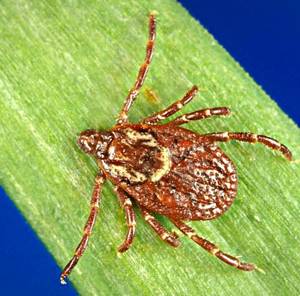 The American Dog Tick (Dermacentor variabilis) is found in the eastern US from Florida to southern New England, and from the Atlantic coast to the eastern sections of the plains states. It may also be found along the Pacific coast.

These ticks are commonly located in grassy meadows, in young growing forests and along weedy roadsides and trails.

The American Dog Tick is a three-host tick, which means it infests and feeds on three different hosts throughout its life. The nymph and adult stages are when this parasite is attracted to dogs and cats. The larvae tend to prefer small mammals and rodents.

In the southern US, larvae seek a host as early as February and continue this for two to three months. In more northern areas, peak larval activity may not occur until late May or June. Most larvae hibernate in the fall and will not seek hosts until early the following year.

Unfed larvae can live for up to 18 months. After feeding (or engorging), the larvae drop off the host and molt to the nymph stage a week later. Nymph questing activity quickly follows, although unfed nymphs can survive for up to 20 months. Nymphs feed for three to 11 days on a host and then drop off and molt to the adult stage two to three weeks later.

Adults feed on cats, dogs, coyotes, cattle, horses, raccoons and other large mammals including humans. Adults may seek hosts that same summer after molting, but often hibernate over winter and begin questing the following spring. Unfed hibernating adults can survive 30 months or longer without a blood meal. Once fed, the adult female mates and then lays up to 6500 eggs over two to four weeks. These hatch a month or more later.

Seasonal tick activity varies widely by geographic region but, in general, adults are most abundant from April through to mid July (when numbers decline until September) so it is advisable to avoid grassy, weedy or forested areas during this time. The entire life cycle can be completed in as little as three months in the southern US but may take up to two years in cooler, northern climes.

There are several diseases which can be spread by the American Dog Tick to dogs as well as humans, including Rocky Mountain Spotted Fever (Rickettsia rickettsii). The symptoms of this disease include fever, lethargy, vomiting and loss of appetite. A rash can develop in dogs as symptoms worsen. The disease can be transmitted after only five hours of feeding, so daily checking and prompt removal of ticks is highly recommended.

This tick can also transmit Tularemia, or Hunter's Disease (Francella tularensis). This can cause a variety of symptoms, including abdominal pain, fever, loss of appetite, vomiting and diarrhea, or even skin or eye ulceration.

Cytauxzoonosis (Cytauxzoon felis), an often fatal cat-blood parasite, is also carried by the American Dog Tick. Toxins found in the tick's saliva, which are injected during feeding, can cause tick paralysis in dogs. This tick plays no significant role in the transmission of Lyme disease or Babesiosis.

The use of tick prevention products such as Frontline, Revolution, amitraz-containing collars or dips, or permethrin-based products, is recommended throughout the American Dog Tick season, in conjunction with daily inspections. Your veterinarian can recommend the most appropriate product for your dog.

If a pet is found to have a tick, it should be removed immediately. Do not touch the tick with your fingers and ensure it is pulled out gently backwards, grasping the tick as closely as possible to the mouth parts to avoid leaving the head embedded in your oet. You may wish to keep the tick in a sealed jar in case your pet develops signs of tick-associated disease, to allow the veterinarian to diagnose it more easily.

If you do suspect a tick-related disease, take your pet to the veterinarian as soon as possible as these diseases have a much better prognosis the earlier that treatment is started.