Bringing a new puppy into your household can be a wonderful adventure and can provide a lot of fun and excitement for the whole family. Whilst many new puppy owners are aware of the need to toilet train and obedience train their new pet, many are unaware of the importance of socialising their puppy whilst it is young. Socialisation of puppies at a young age helps them develop coping mechanisms for being in new situations, develops appropriate behaviours with other dogs and an understanding of human-dog relationships. 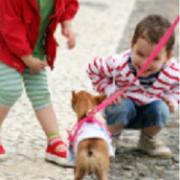 When to Start Dog Training

Although not definitive, the period between 3 weeks and 3 months of age is generally recognised as a sensitive period of development for puppies. It is identified as the socialisation period and a good time to start dog training. The significance of this period is highlighted by the fact that any experiences had by the puppy during this time (whether positive or negative) will have a profound impact on the animal's behaviour in adult life. It is suggested that puppies attend puppy preschool between 8-14 weeks of age so as to be exposed to other puppies to learn appropriate dog behaviour interaction with other animals and unfamiliar owners. Owners will also benefit greatly from attending such classes, often run by veterinary clinics, as they will be educated on training their puppy, important health issues and responsible dog ownership. All you usually need for these classes are a dog lead, dog collar and a few dog treats and you're ready to go.

In the initial stages, socialising your puppy does not include taking it to parks and the like and letting it roam freely with other dogs. In fact veterinarians will recommend that your puppy not be walked in such areas until the full vaccination schedule is complete. This is to protect your puppy from the potential exposure to viral diseases before the vaccinations are at maximal effect. The dog needs to be introduced to other puppies and people in a controlled environment. Veterinary clinics which run puppy preschool classes should ensure that all puppies are up to date with their vaccination schedule before allowing them to join a dog training class. Whilst your pup will be able to venture on walks and interact with other dogs at a later date, precautions are needed in these early stages.

Socialisation of puppies is an extensive area but the overall impact of this dog training is to make the puppy be able to be calm and relaxed around other dogs and unfamiliar people, to remain calm in the presence of noises such as vacuum cleaners, and to be exposed to and learn appropriate behaviours in both familiar and unfamiliar situations. Although an important part of the process, socialisation is not purely about allowing puppies to play together.

The socialisation period of puppies is also an important time for establishing what is normal in the household in which the animal is to live. The socialisation period of the puppy can therefore be best described as a period where the animal forms an 'expectation' or 'template' of what is safe and normal in its environment. Hence, whatever the puppy experiences or contacts during this time will be considered normal and accepted by the animal. However, any stimulus the animal is not exposed to during this time has the potential to induce a fear response if experienced for the first time later in life. Dogs are adaptable creatures and can adapt their behaviours through continued exposure even as adult animals, but the exposure to as many aspects of normal life including common household noises and loud noises during this crucial socialisation period can help reduce the development of certain fears and phobias later in life. Also important during this dog training period is allowing the puppy to experience periods of quietness and calmness and also to experience periods of time alone to help reduce the development of separation anxiety.

Socialising your puppy is a fun and extremely rewarding process for both the owner and the animal. It is crucial that the puppy be appropriately socialised during this period of its development to help reduce the development of fears and phobias later in life. It will also serve to enhance the development of the human-animal bond and to teach your puppy about appropriate and acceptable behaviours in your household and in the presence of other dogs and people. Whilst the dog training socialisation period is an important period of development for your puppy, socialisation and other dog training should continue as an ongoing part of your commitment to responsible pet ownership.