Toxic Foods For Dogs And Cats

While we all like to think of our cats and dogs as members of the family, we have to remember that they are not HUMAN member of the family.

Even though some of our furry friends might sleep on our beds and act just like one of the kids, the family dinner is not always the best meal for our pets. They have very different digestive systems to us and their bodies do not process foods in the same way as our bodies do.

Some of the foods that we eat can be toxic to pets. Other foods are not necessarily toxic, but can cause digestive problems, or even obstructions in the gut.

The best food for pets is actually that which is specifically formulated for them. Pet food is designed to be a complete and balanced nutrition regime for our cats and dogs. While people need variety in our diets, our pets do not. In fact, this in itself can cause digestive upsets, vomiting and/or diarrhea.

Let us examine a few potentially problematic foods and what they can do to our pets. 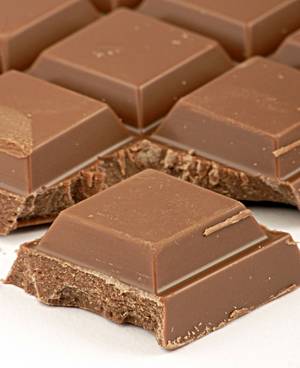 1. Chocolate: This is one of the most common dog poisoning agents which is reported to the ASPCA Animal Poison Control Center. Chocolate contains two different kinds of toxins called methyxanthines. One of these is well-known to most people as caffeine, but the other, theobromine, is less known and more dangerous.

Chocolate tends to cause digestive upsets initially, as it is high in sugar and fat. Vomiting and diarrhea are often the initial symptoms. Six to twelve hours later, the chemicals themselves start acting. They tend to have a diuretic effect, so the pet may urinate more than usual and become thirsty. Pets often become agitated and start pacing.

More dangerous symptoms then develop, including an elevated, sometimes irregular heart rate, blood pressure changes and seizures. These signs can last for up to three days if untreated, and can be fatal to the pet, with the heart or breathing giving out. Any cases of suspected chocolate toxicity should be immediately reported to your vet. Prompt treatment will mean a much better prognosis for recovery.

2. Bones: Feeding dogs bones is a hotly-debated topic. For every advocate of the health benefits gained by dogs eating bones, there will be someone just as strongly opposed to them. 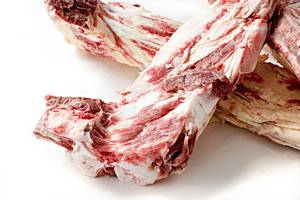 Cooked bones are dry and brittle and can absorb water from the gut , causing constipation and blockage of the intestines. Whilst cooked bones are the main culprit, raw bones can also splinter and perforate the gut (leading to severe illness), which usually requires surgery to repair. Bone fragments can also become lodged in the mouth or throat, causing discomfort at best, choking at worst.

Raw bones can also, in rare cases, cause food poisoning if contaminated by bacteria, such as Salmonella or E. coli, leading to diarrhea and vomiting (as with humans). Bone marrow is primarily composed of fat, so overindulging in this part of the bone can result in pancreatitis in susceptible dogs. Discuss this topic with your vet and make up your own mind, but be aware of these risks and always supervise your pet while chewing on bones if you do decide to feed them.

3. Onions & garlic: These vegetables contain substances called disulphides, which damage the surface of red blood cells and cause them to burst. Cats are more susceptible to this disease than dogs. The result is a disease called Heinz body anemia. As red blood cells are responsible for transporting oxygen all over the body, the pet becomes weak and breathless, tiring easily. Severely-affected animals may require a blood transfusion for recovery. The red pigment from the burst blood cells appears in the urine (called hemoglobinuria), and can be easily confused with a urinary tract problem. 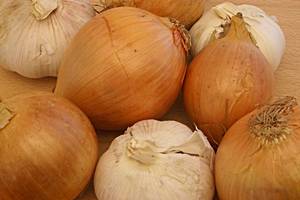 Digestive upsets with vomiting and diarrhea normally precede the respiratory problems and discolored urine by a day or two. A single large exposure or several small exposures to garlic or onions over a few consecutive days can cause this problem. The toxic component is contained in the bulbs and stems of these plants and remains in even processed forms, such as powders, so we advise avoiding all sources of these for the best health of your pet.

4. Mushrooms: There are several types of toxins in different types of mushrooms. These can cause anything from kidney and liver failure, (with abdominal pain), to delirium and hallucinations, to vomiting and diarrhea to seizures, coma and possibly death. The symptoms can start anywhere from 20 minutes to 8 hours after ingestion of the mushrooms.

The wide range of signs which can be seen with mushroom intoxication means that the treatments and prognosis are highly variable. Amanita mushrooms tend to be the most toxic. Bear in mind that these can grow wild as well as appear in your kitchen, so care when walking dogs in grassy or forest areas that they do not feast on these when you are not looking. 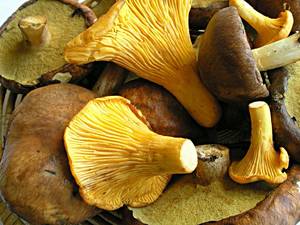 5. Grapes and raisins: These are a fairly recent addition to the poisons list for pets, and the toxin contained in these so far has not been identified. The typical signs of grape/raisin poisoning in pets include vomiting, followed by diarrhea and anorexia. Animals develop abdominal pain and lethargy, which has now been linked to kidney damage in affected pets. The signs can commence from 24 hours after eating the fruit and can last for weeks.

If the kidney damage is severe enough to halt the production of urine, this snack can be fatal. If aggressive medical therapy is started early, treatment can be successful, so contacting your veterinarian as soon as possible if you notice a pet has eaten these fruits is imperative.

6. Corn on the cob: This is not a toxic product. Corn kernels are a commonly-recommended ingredient in homemade diets. However, if swallowed whole on the cob, it is the right size and shape to block an intestine. This will initially seem like your dog is constipated dog with abdominal pain. However it can become serious if not cleared, as it can damage the intestine wall. Food backing up behind the blockage will do more damage to the intestine and can lead to perforation and a very sick dog. Surgical intervention is generally required to remove corn cobs.

This is by no means an exhaustive list of all toxic foods for pets. Your vegetable patch contains many more potential poisons: potatoes (particularly green ones), tomato leaves and stems, rhubarb leaves, peach stones, plum stones, macadamia nuts, apple cores and avocados, to name just a few. Play it safe and feed your pet only what your vet recommends. Table scraps from our plates not only present a poisoning risk, but are also one of the main reasons for the pet obesity epidemic. Its best to feed pets a good-quality pet food formulated to provide the best nutrition for their particular age.

With any possible case of poisoning, Pet Shed recommends that you consult your veterinarian immediately for advice you on the appropriate treatment. With most cases of poisoning, the sooner treatment is instituted, the better the prognosis. This way you limit the amount of toxins absorbed into the body, and your vet may be able to limit any further absorption of the toxin with appropriate therapy.

There are also poisoning assistance hotlines devoted to animals; the Animal Poison Hotline on 888-232-8870, or the The ASPCA Animal Poison Control Center on 888-4ANI-HELP (888-426-4435) can provide advice on cases of suspected toxicities. Note that there is a fee for these services.

Remember, prevention is better than cure!