Ear Mites In Dogs And Cats 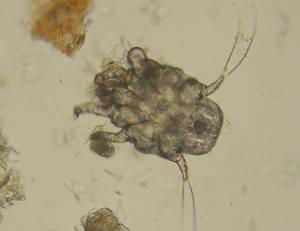 Ear mites, which can affect both cats and dogs, live in the ears but can venture out to the head and body, including the tail, or drop off the animal altogether and transfer from one pet to another.

The same mites, Otodectes cynotis, can affect both cats and dogs as well as ferrets, mice and other animals, but they very rarely affect humans. Sometimes other skin mites, fleas, lice or ticks can make their way into the ear.

Ear mites cause intense itching in most animals. They are the number-one cause of ear disease in cats and are also quite common in dogs. They are more common in younger animals or sick pets with depressed immune systems.

However there are other ear diseases such as fungal and bacterial infections or allergies which also cause itchy ears, so it is always advisable to take a pet which is shaking its head, scratching at its ears or rubbing them on furniture or the ground to a veterinarian for a correct diagnosis. Although mites may often be the initial reason for the ear disease, the inflammation they cause can lead to secondary infection.

In animals with ear mites, the discharge from the ear is usually dark brown-black, resembling coffee grounds. The ear mites themselves are very difficult to see with the naked eye, but look like small white specks scurrying around. Your vet will be able to see them using either an otoscope in the ear canal or by taking a sample of the discharge from the ear and looking at it microscopically.

The ear mite takes about three weeks to complete its life cycle from egg to larval and adult stages.1 Adults can live for up to two months. Many of the treatments available for ear mites are not active against egg stages, so they should be continued for a prolonged period to kill any juvenile mites emerging from eggs.

The first step in the effective treatment of ear mites is thoroughly cleaning the ears and removing all of the discharge. A good ear cleaner designed to clean and break down wax is needed for this. If the debris is left in the ear it allows the mites to hide and avoid the medication which then may not be effective. Because mites are so easily transmitted, all nearby pets should be treated to ensure they are not harboring any stragglers which could re-infest the treated animal.

There is a wide choice of medications to treat ear mites, encompassing both prescription and non-prescription products.

Gone are the days of puring paraffin down the ears in the hope of drowning the mites!

Firstly, there are drops containing ingredients such as pyrethrins (natural insecticides). They also often contain other anti-bacterial or anti-fungal ingredients. These will not kill the egg stages, so treatment must continue for at least three weeks to allow any hatching eggs to be killed. Many are available without prescription.

There are also other medications specifically designed for ear mites in cats, such as Acarexx (ivermectin) and Milbemite (milbemycin). These are both topical treatments which require only one treatment to clear the mites. Both are available only by prescription.

No treatment should be introduced into an ear without first checking that the eardrum is intact. Many ear cleaners and treatments can cause deafness or balance problems (ototoxicity) if they contact the inner parts of the ear exposed by a ruptured ear drum.

It is always advisable to have an ear mite diagnosis confirmed by a veterinarian as the disease can easily be confused with bacterial or fungal infections, which require different treatments.