Blame It on the Moon 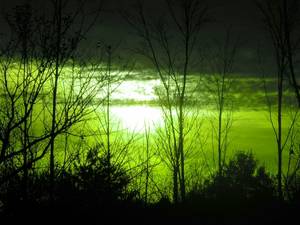 You're walking down a dark lane, a cold wind howling at your back, and the silhouettes of gnarled tree branches just visible against the night sky.

Suddenly the clouds clear, and a brilliant full moon bursts forth. You hear a rustling behind you... a snarling, a snuffling... even growling? A misshapen, furry hunched figured glides through the trees behind you, following your scent.

You nervously look around - surely it's only your old dog Rex? Werewolves don't exist, right?

Well according to a new scientific study, you could be right on both accounts. If you dog or cat is acting strangely all of a sudden, it may be due to the full moon.

Researchers could have found a definite link between lunar activity and the way your pet dog or cat behaves, according to a new report. It's enough to raise the hairs on the back of your neck.

Traditional folk wisdom has long held that the different phases of the moon have a strange, often unpredictable effect on all types of animals. According to traditional folklore, the full moon was often the best time to hunt or sow crops.

However the new 11-year study by a group of researchers from the Colorado State University College of Veterinary Medicine and Biomedical Sciences (CVMBS) says there may be a link between the phases of the moon and the frequency of pet visits to veterinary emergency rooms.

According to Animal Pharm, the scientists studied the case files of more than 12,000 dogs and cats being treated at the university's veterinary facilities and found that during our moon's three 'fullest' stages, dogs visited the emergency room 28% more than average, while cat visits were up by 23%.

It has often been suspected that both human and animal behavior is affected by a full moon (such as hospitals being busy during a waxing gibbous, full, or waning gibbous moon) and this study indirectly supports the idea that basic terrestrial physiology could be linked to lunar cycles.

"While the results of our retrospective study indicate that there is an increased likelihood of emergency room visits on the days surrounding a full moon, it is difficult to interpret the clinical significance of these findings," said study leader Dr Raegan Wells.

"Many studies have investigated the effect of the moon on human nature, behavior and various medical problems, with evidence both supporting and refuting the effect." According to the original study published in the American Veterinary Medical Association (AVMA) journal, among the emergencies were cardiac arrest, epileptic seizures, and trauma.

Whatever the reason, these lunar trends cannot just be ignored. According to the study, one possible reason for the increasing number of cat injuries during a full moon is that this period experiences increased lunar luminosity, which may increase your pet cat's predilection to hunt at night.

Skeptics have fought long and hard to fight the idea of 'lunacy', or behavior determined specifically by moon phases, conducting multiple studies into all facets of human and animal society in their attempt to prove that there is no such lunar effect.

In part this new study also supports the skeptics' case. While the results may catalog the increased injury rate in pets in general, an increase in the number of feline trauma cases was not evident in the data, according to the Animal Pharm report. The report also stated that there was no noticeable canine injury rate increase in dogs acting more aggressively during a full moon.

One other point to note is that while the percentage increase in animal vet visits is alarming on the surface, it only equated to on average one extra dog or cat visit to the vet during the relevant period.

So perhaps you can rest a little easier, and put away the silver bullets for a little longer....