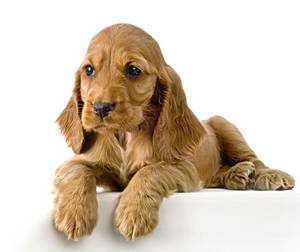 According to a new study, redheads really are fiery, blond jokes are scientifically justified and it's a fact that bald men have no personality.

Well no, that's not exactly true - I'm sure there are plenty of charismatic bald guys out there.

Alright, I'll confess - there is no such study proving people's personalities can be determined, or even influenced, by the color of their hair.

But a new study recently published in the academic journal Applied Animal Behavior Science has revealed that the color of your dog's coat actually reflects its personalities.

I have to say, this finding really surprised me. According to Pet Product News International, the study determined that golden-red English Cocker Spaniels exhibit the most dominant and aggressive behavior, black spaniels were the second-most aggressive, while white dogs with patches of color were found to be the most-mild-mannered.

And a previously-reported study involving Labrador retrievers also found a link between coat color and temperament. Yellow Labs were found to be the most aggressive, black labs moderately so, and chocolate Labs the most passive.

Coat-study lead author Joaquin Perez-Guisado of Spain's University of Cordoba said the link found between coat color and personality in dogs is most likely due to related genetic coding that takes place in the earliest days of a pup's development in the womb.

According to PPNI, the study measured the aggression and dominance levels in 51 seven-week-old English Cocker Spaniel puppies by studying how they responded to various stimuli. In many cases the golden-colored puppies resisted human contact, while the white-coated dogs seemed to enjoy the experience.

So what are we to learn from this? Admittedly, the sample size for the study was pretty small, but can these findings be true? And what about those blond jokes? Can 25 billion wisecracks be wrong?

Well, I'm not sure about the blond jokes, however I do think that the study gave us one important finding.

Perez-Guisado said that while genes did determine coat color and seemed to have some bearing on personality in certain dogs, environmental factors, such as how the dog was raised, appeared to have a much larger bearing in the final behavior displayed by any particular animal.

The study said that environmental factors, such as dog's training and how it is raised account for up to 80 percent of dominant, aggressive personalities, while genes contributed no more than 20 per cent of a dog's personality.

All jokes aside, what does this study say?

Well to me, it tells us that family is the biggest factor in shaping an individual's personality. Whether we are talking cats, dogs, chocolate Labradors, blond woman or bald-headed men, family is the key.

You are the biggest factor in shaping your pet's personality. Give your pet a stable, supportive home environment with plenty of treats, positive reinforcement - and most importantly love - and you'll have a loyal, affectionate friend for life.

Do you agree? Does your pet's coat color have any effect on its personality?